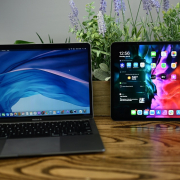 Today, we take a look at a comparison between the iPad Pro vs M1 MacBook Air.

If you want a video of the two devices compared, please check this one out:

Both are great choices on their own, but one will have to be a winner in the end!

In terms of CPU comparison between the two Apple devices, the A12Z Bionic inside the iPad Pro gets 1126 single-core scores in Geekbench 5, while the multi-core score is 4708. On the other hand, the M1 scores 1747 in single-core and 7653 in multicore.

The processor alone would be an upgrade worth having over the iPad Pro, don’t you think?

But, when we compare them both (as of February 2021), the iPad Pro is much better at playing Fortnite, which is one of my favorite PC games of all time! While the M1 MacBook Air struggles to keep up with the iPad, even with its more powerful CPU and GPU, because of the lack of optimization on the Epic’s end, as they’re having that dispute with Apple.

Because the iPad Pro comes with a 120Hz higher refresh rate, compared to the M1 MacBook Air’s only 60Hz display, it seems more fluid and is a better overall gaming device because of this advantage that it has over the MacBook Air M1.

But if you do not care much about a higher refresh rate, which you probably should care about, then you can go ahead and get the M1 MBA instead, which could give you an advantage in some of your other tasks that don’t rely on a more portable device such as the iPad Pro.

Portability is another thing that goes as a score for the iPad Pro, as you can use it as a tablet as well as a laptop, while on the M1 MBA you only have the option of a laptop and can’t make it anything else that’s more portable and compares to the portability of the iPad Pro.

If you want a more portable gaming solution, the iPad Pro is definitely the better option out of the two, otherwise, go with the MacBook Air if you don’t care much about the portability and want a better and more powerful processor and graphics card.

iPad Pro vs. M1 MacBook Air – Which one to get?

To summarize it all, the M1 is a better device for those who aren’t looking for portability and are more of powerhouse users and want a more powerful device out of the two that can handle gaming as well as multitasking better. The iPad Pro is for those who want the portability aspect, as well as more of an affordable device.

This was a guest post by Umar from Laptopar.

what laptop do you recomend me working as an online writer with a budget of 1k USD max?
I want to get the best value out of my money.
thanks

Because these cookies are strictly necessary to deliver the website, refusing them will have impact how our site functions. You always can block or delete cookies by changing your browser settings and force blocking all cookies on this website. But this will always prompt you to accept/refuse cookies when revisiting our site.